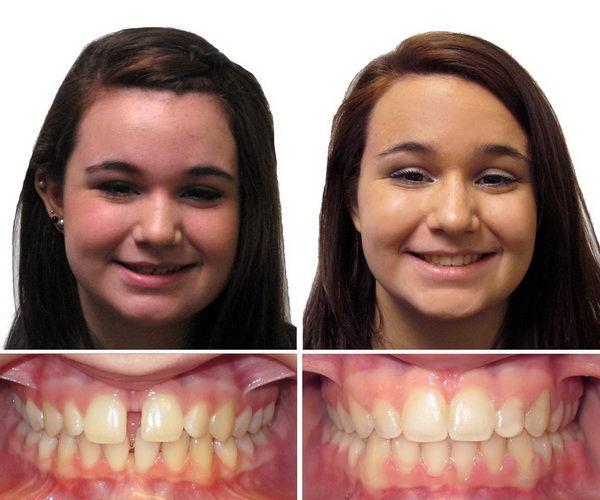 Torey initially presented with a chief complaint of spacing, rotations, and flared upper front teeth. She was treated with fixed braces in approximately 20 months and finished with excellent occlusion. A fixed upper retainer was bonded to help prevent the pretreatment space from returning. Removable overlay retainers have also been recommended to prevent relapse. 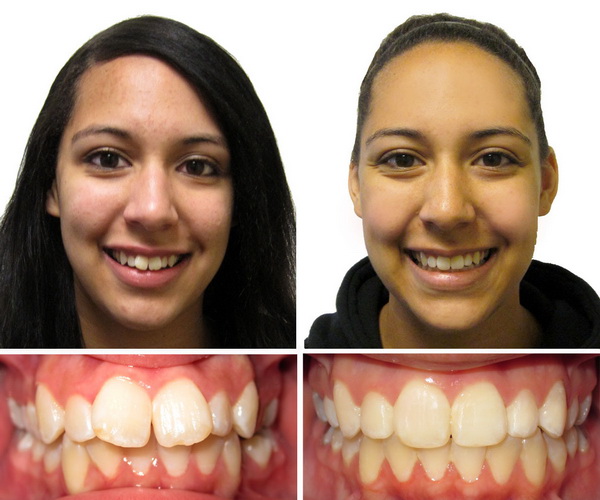 Lisa initially presented with a chief complaint of crowding, overjet and overbite, and protrusion of her front teeth. She also had lip strain to achieve closure. She was treated with upper first premolar extractions and fixed braces for approximately 23 months and finished with excellent occlusion. This treatment plan enabled a reduction in the overjet and overbite, and the resultant reduction in protrusion also led to a closed resting lip position without strain. 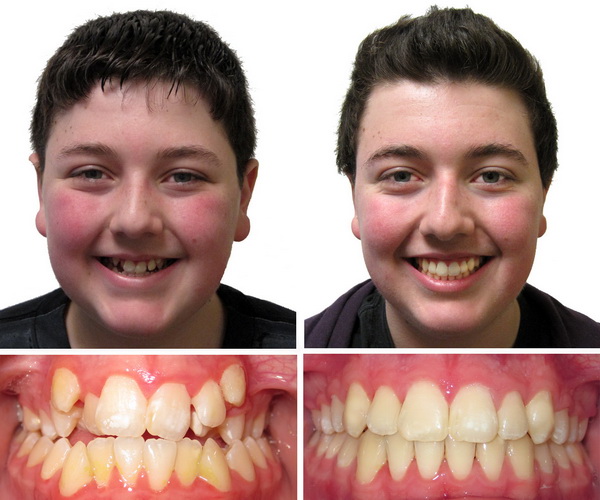 Michael initially presented with a chief complaint of crowding, a narrow palate, and an anterior and posterior crossbite. He also had high, blocked-out canines and an open bite. He was treated without the removal of teeth, with fixed braces for approximately 2 years, and finished with excellent occlusion. Note the improvement in the smile width, the resolution of the crowding, and the overall improvement in his occlusion and smile aesthetics. 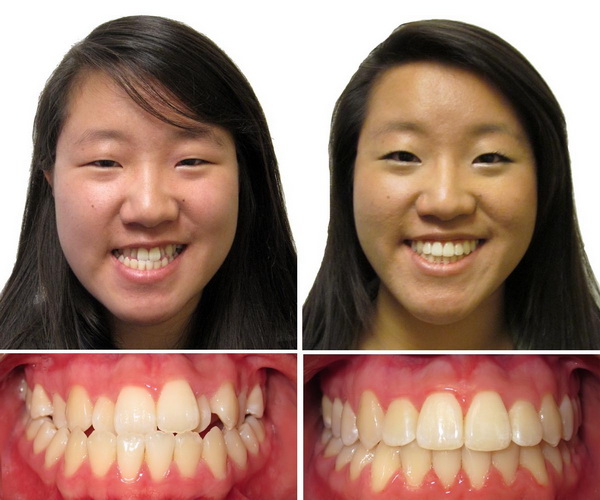 Rachel initially presented with chief complaints of crowded upper teeth and an underbite. She had a full cusp class III malocclusion, with severe upper crowding and a mandibular skeletal deviation to the right. Note the full anterior crossbite and the posterior cross bite. Options for treatment included braces or braces with orthognathic surgical correction. Rachel opted for treatment with orthodontics alone, with 32 months of fixed braces, and finished with excellent results. Through a combination of expansion and class III mechanics, we were able to improve the overbite and overjet, correct the crossbites, and achieve symmetric dental midlines. This also helped to produce overall improvement in facial harmony and symmetry, even though the lower jaw itself remained deviated slightly to the right. 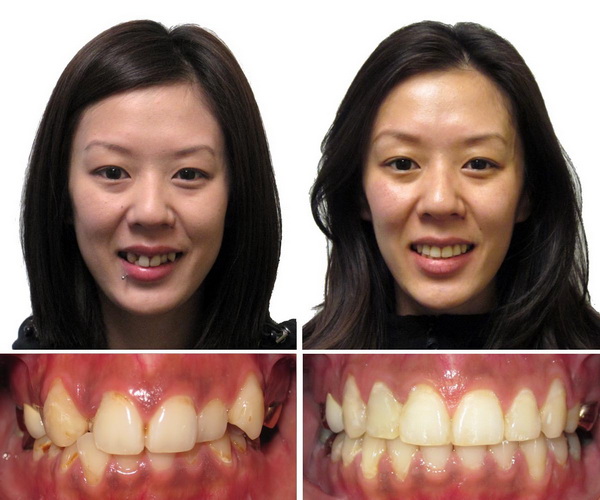 Laura initially presented with the chief complaints of severe upper crowding and a crossbite of her upper right lateral incisor (#7). She was treated with the removal of two upper first premolars and fixed braces for approximately 30 months, and finished with excellent occlusion. Note the correction of the crossbite, the resolution of the crowding, and the overall improvement in her smile width and alignment. 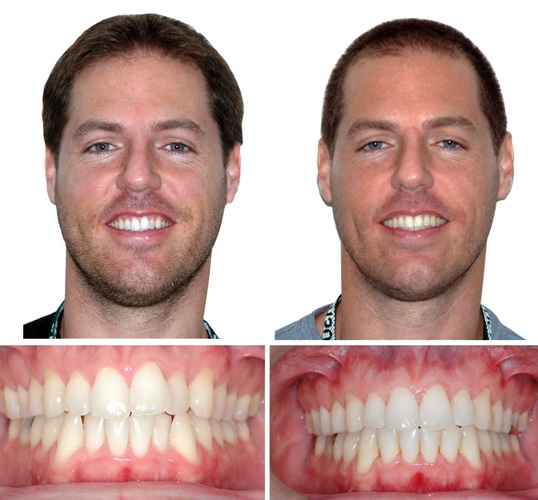 Chris is a dentist who was desiring not only aesthetic, but also functional enhancement to his smile and bite. We treated Chris with “invisible” (aesthetic braces) in less than 12 months. Our doctors have treated several doctors and dentists, and it is the highest compliment when other healthcare providers entrust Children & Family Dentistry & Braces with their orthodontic care. 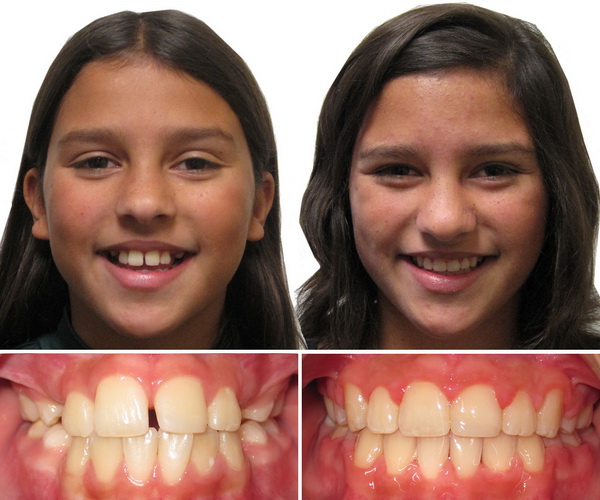 Becca originally presented to the orthodontist with severe crowding in the early mixed dentition, and a pattern of guided tooth eruption was initiated. Becca was in treatment with fixed braces for approximately 23 months and finished with excellent occlusion. 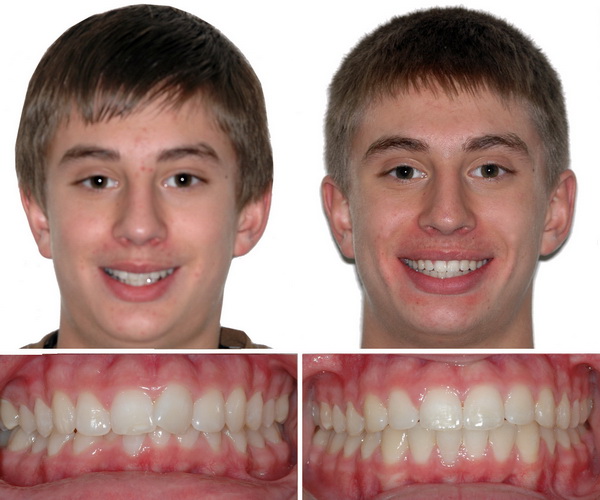 Matthew originally came to the orthodontist with a desire to improve the deep overlap, crowding, and rotations of his teeth. Look at how much bigger and bolder his smile is after 19 months of braces. 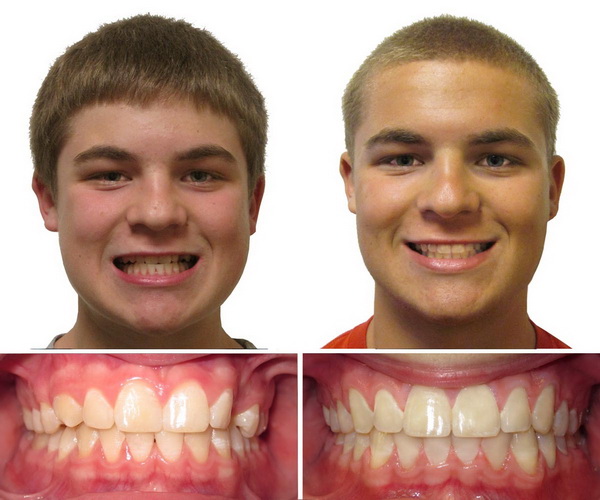 Brad initially presented as a class II subdivision right malocclusion, with an impacted upper left canine and midline deviation. He was treated with full fixed braces, and by creating ample space for the impacted tooth, we were able to bring the canine into the arch. He was treated in approximately 2 years and finished with excellent occlusion, with full correction of the class II and coincident midlines. 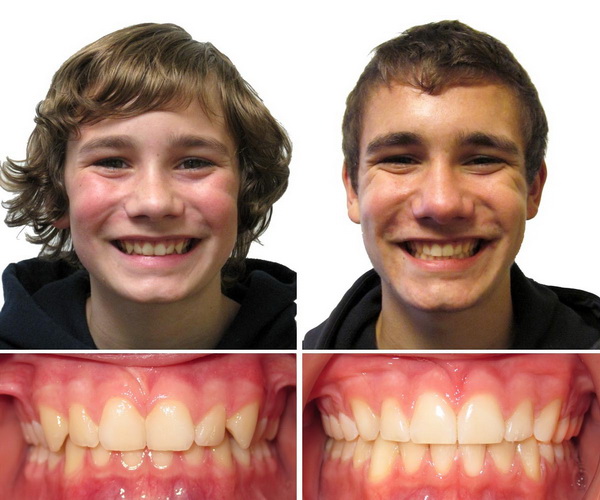 Paul initially presented with the chief complaints of overjet, overbite, and rotations. He began with a Class II dental and skeletal relationship, and underwent comprehensive treatment with a functional appliance (twin block therapy) for class II correction/growth modification, followed by full fixed appliances. He was treated with no extractions in approximately 2 years and finished with excellent occlusion. 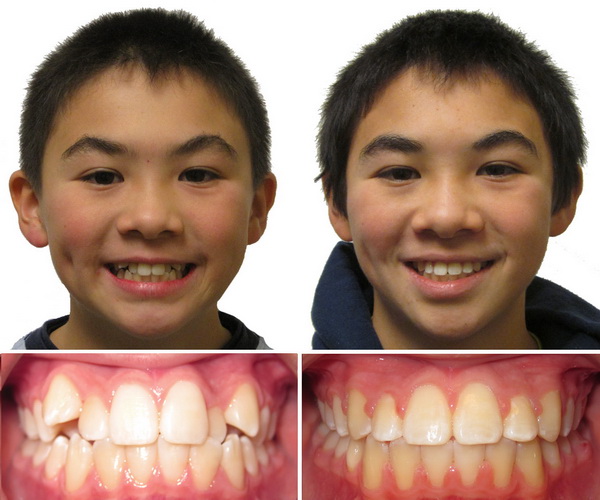 Stephen came to our doctors with a desire to fix his crowding and blocked-out canines. He was treated in approximately 23 months with fixed braces. 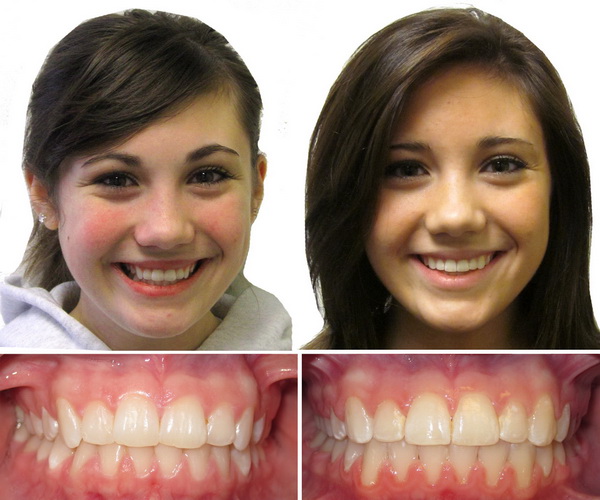 Brianna initially came to the orthodontist with a desire to correct her upper and lower crowding, rotations, and excessive overbite. She was treated in 16 months of fixed braces and finished with excellent occlusion. 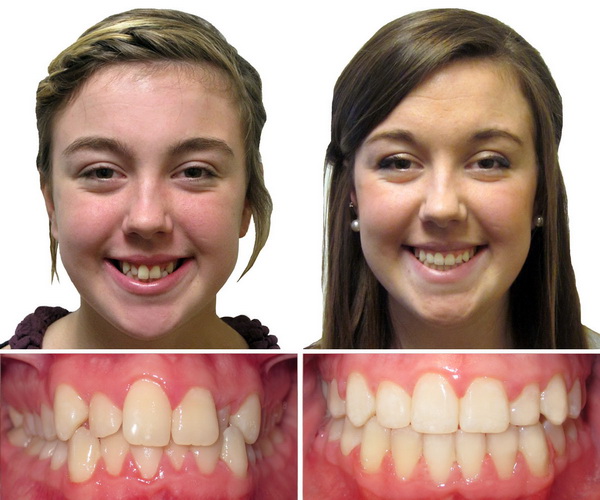 Michelle initially presented with a chief complaint of crowding, a narrow palate, and a crossbite of the left lateral incisor. She was treated with fixed appliances in approximately 23 months. Note the increased smile width and the correction of the crossbite, both corrected with braces alone. 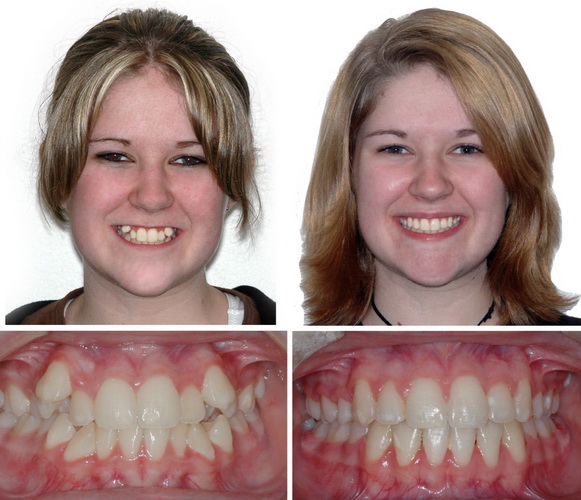 Kim came to the orthodontist with significant crowding. The canine teeth were completely blocked, and forced to come in on the sides because of the lack of space. In 22 months of braces, our doctors were able to give Kim her fantastic new smile. Notice how our doctors were able to correct the position of and guide the canine teeth, which are important for not only aesthetics but also function.

Brendan started with crowding of the lower teeth and narrow arches. Our doctors treated Brendan with braces in just 11 months. Brendan is a talented musician and a fantastic young man. He is off to New York’s Pratt Institute with his new smile! 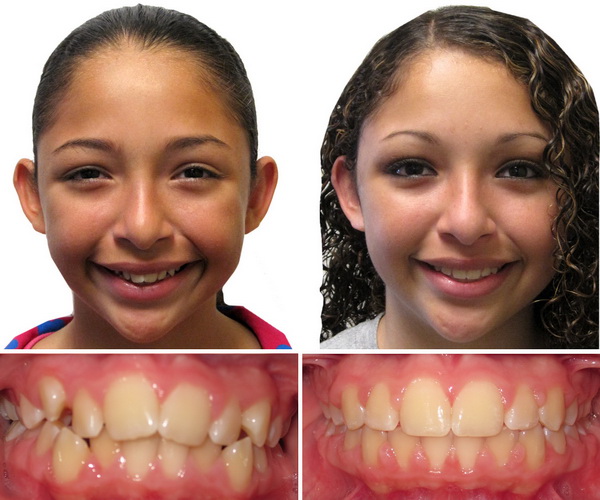 Viviann came to the orthodontist with a complaint of crowding and proclination. Our doctors were able to transform her smile through 23 months of full braces, without the removal of any teeth. Note the change in smile width and the great occlusion. 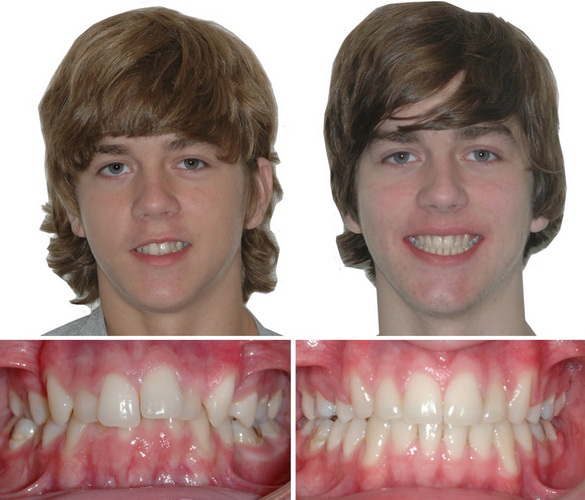 Edward came with 3 missing back teeth and crowded/protruding front teeth. Notice how much the upper teeth overlap the lower teeth in the “before” photo and how much they change after treatment. Our doctors were able to use the spaces from the missing teeth to resolve the crowding and reduce the protrusion, and avoid Edward having to receive dental implants to replace the missing teeth. Our doctors provided Edward with an even, balanced bite which is healthier, easier to clean, and looks fantastic. Edward’s treatment time was 24 months, and he now has a much brighter, fuller smile. 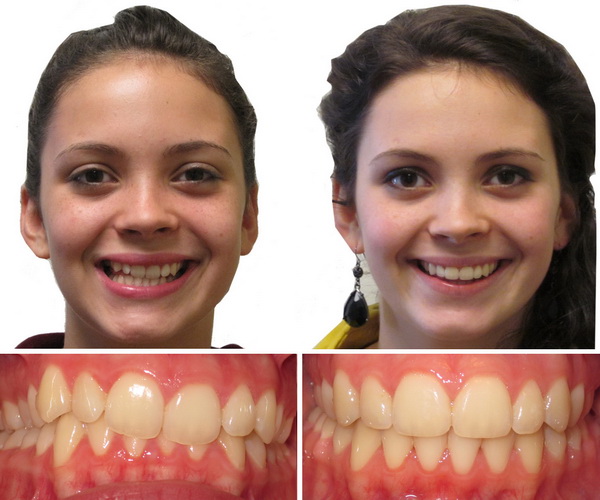 Leah initially had a deep overbite, and an asymmetric (tilted/uneven) smile line. Our doctors were able to create Leah’s beautiful smile with 15 months of full braces. Note the improvement in the overbite and the even, symmetric smile. Leah is a competitive cheerleader and her smile is something to cheer about! 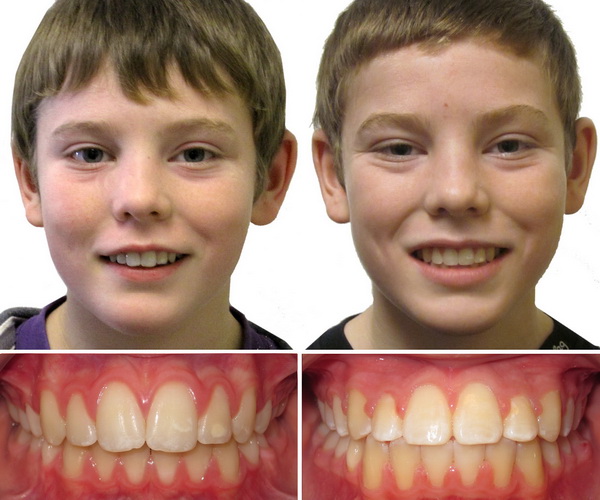 Spencer initially presented with a chief complaint of lower jaw retrusion, excessive overjet, excessive overbite, and a desire to improve his bite. Michael opted for functional appliance therapy with a Herbst appliance for class II correction in conjunction with fixed braces. He was treated in approximately 22 months overall and finished with excellent occlusion. 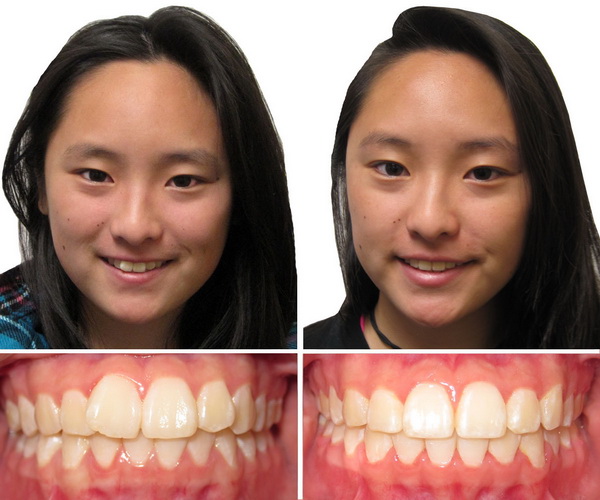 Cathrine initially presented with a chief concern of crowding, overjet, and asymmetry. (Note the midline deviation with a left side full class II relationship.) She was treated with fixed appliances in approximately 24 months. She finished with excellent occlusion, a full correction of the class II, and idealized occlusion and improved overjet. Early attrition is evident due to bruxism, and nightly-worn overlay retainers have been recommended.

we accept most dental insurance plans 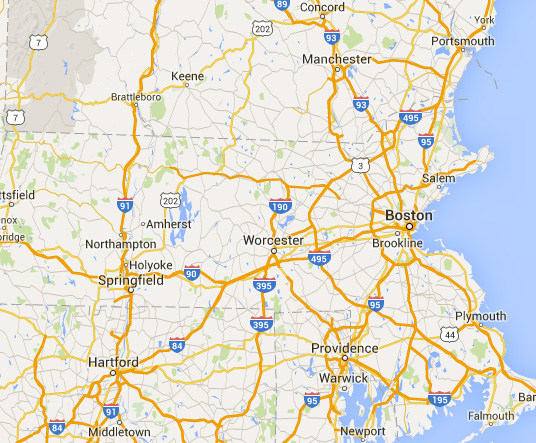